During this years visit to New York I made good use of the new ferry system called “NYC Ferry” that was inaugurated this spring. New York is a city of islands: first and most popular Manhattan and as the name suggests Staten Island, but the boroughs of Brooklyn and Queens are also located on an island, Long Island that is. The Bronx ist the only borough on American mainland. Adding to these islands are all the small islands that belong to NYC such as Liberty Island, Ellis Island, Govenors Island, Roosevelt Island and City Island just to name a few. Coney Island however is despite its name not an island.

But NYC isn’t called the concrete jungle for nothing, too often you spent days after days in the streets without ever seeing the Hudson or East River or the Atlantic Ocean.

I wanted to try all of the new ferry routes, and did so except for the East River Route, which I had taken some years ago, when it still operated under the name East River Ferry. I blogged about it here.

Right now there are 3 more routes connecting Manhattan, Brooklyn and Queens: Astoria, South Brooklyn and Rockaway. Two more will launch in summer 2018: the Lower East Side Route and the Soundview Route, that will connect the Bronx and Manhattan.

I rode the Rockaway Ferry from 108th Street on the Rockaway Peninsula to Sunset Park in Brooklyn, the Astoria route from Wall Street to Roosevelt Island and also from Long Island City back to Wall Street. On my last full day in NYC I took the South Brooklyn Ferry to Red Hook and back to Manhattan.

Every journey has been very enjoyable: the boat has toilets, a snack bar, outlets and is air-conditioned, but you can also sit on the deck if the weather permits.

What I liked most about the ferry rides were the incredible views of the Manhattan, Brooklyn and Queens skylines! The best time to take a ferry to get good views of the skyline is after sunset: 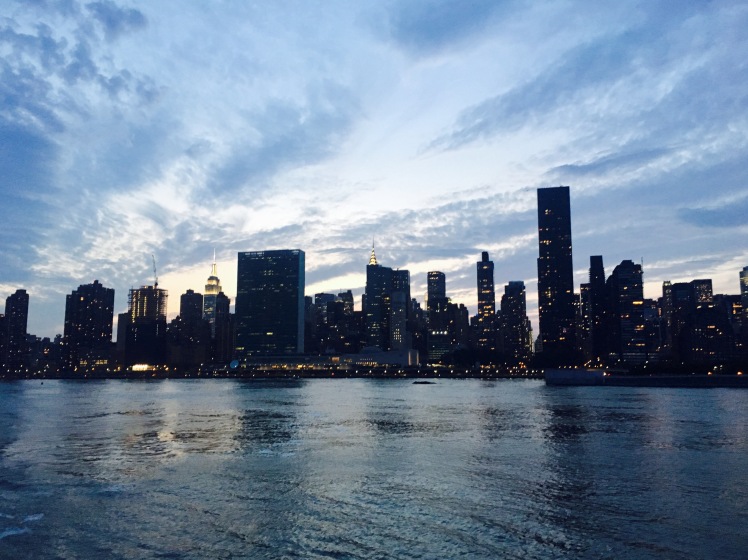 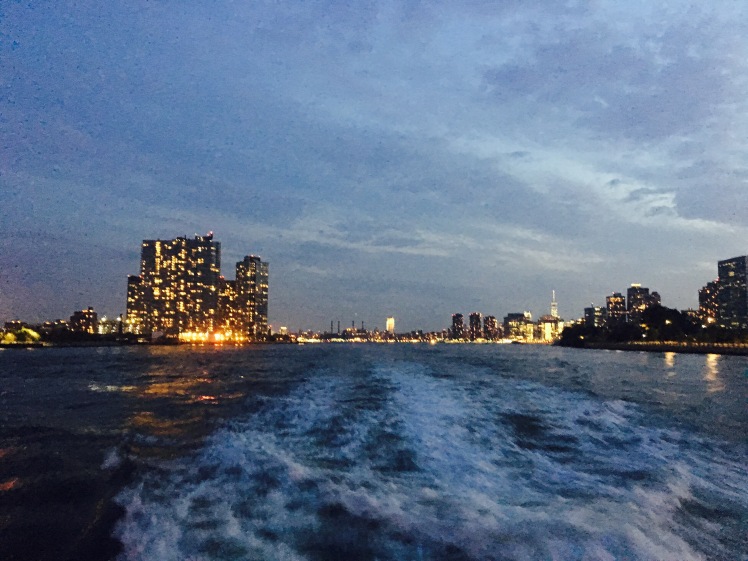 The price of a one-way ticket is currently $ 2.75, same as a subway ticket. Unfortunately it’s not possible to use your Metro Card, tickets must be bought via the NYC Ferry App or a ticket machine at every landing. You cannot transfer to the subway with those tickets, though free transfers within the ferry routes are possible at Wall Street, E 34th Street, Dumbo and in Sunset Park.

Whether you’re trying to get fom A to B or you just wanna enjoy a ferry ride and the scenic views: NYC Ferry is the best choice. There are tourist ferries on the river, but those cost up to $50 and are -of course – only used by tourists. I definitely prefer the NYC Ferry and can’t wait to try the 2 new routes next summer!

All information, routes and schedules are here: ferry.nyc